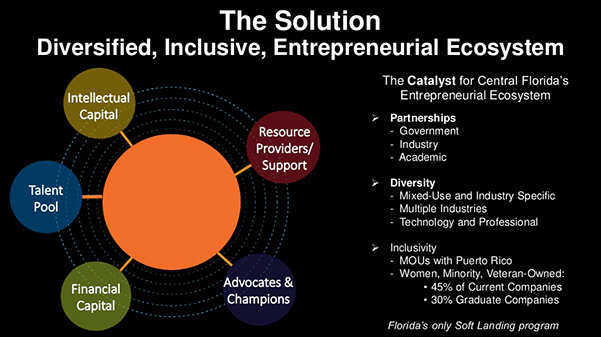 Founded in 1999, University of Central Florida Business Incubation Program (UCFBIP) is a network of eight incubators which support and unite innovators and entrepreneurs from the region’s universities and communities. The incubators are strategically located to provide early-stage companies throughout Central Florida with the tools, training, and infrastructure to evolve from startups towards business maturity. The UCFBIP’s core services address the common needs of small businesses, and engage the entire spectrum of support resources throughout Central Florida for transformative economic impact throughout the region.

UCFBIP exemplifies ecosystem interconnectivity. Supported by UCF, the Florida High Tech Corridor Council, and local governments across the region, UCFBIP has created and implemented a vast network of academic, government, and industry partners that integrate seemlessly into the program to increase the opportunity for company growth and economic impact. Its speciality programs encourage diversity to support the unique needs of minority and veteran entrepreneurs, and the two industry-specific incubators – photonics and life sciences – support the growth and development of two of the regions most critical, and fastest growing, industry clusters.

UEDA Awards of Excellence Finalists presented at the Annual Summit in Milwaukee on October 22 and 23, 2018. Summit attendees then voted for the best initiative in each category.