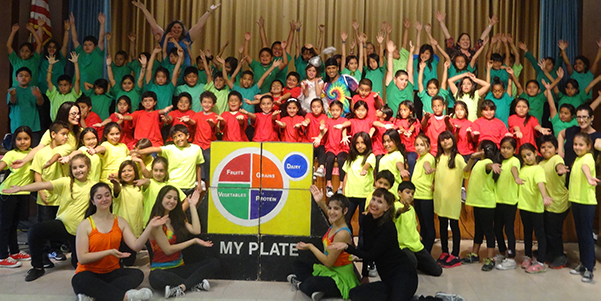 “MyPlate! The New Food Guide Musical” is an interactive and unique intervention program performed by professional Broadway actors, university students, and children at elementary schools in underserved communities. Over the last three years, CSUN’s Marilyn Magaram Center and the Fitness and Nutrition Initiative have collaborated to study the effectiveness of this program on children’s healthy eating and physical activity, with a focus on lowering childhood obesity and chronic disease. This national initiative has been implemented 95 times, reaching 9,500 participating students (and over 28,500 student viewers) and consists of a series of nutrition education classes in conjunction with physical activity in the form of rehearsals and performance of an original musical.

MyPlate! was developed by Helen Butleroff-Leahy (a registered dietitian, ex-Rockette, Broadway dancer, director, choreographer) and her co-writer for the musical portion is Roumel Reaux.  MyPlate! is run by The Nutrition and Fitness Education Initiative, Inc., a not-for-profit company with 501C3 status.  MyPlate! was brought to Los Angeles (LA) as a collaboration with CSUN’s Marilyn Magaram Center’s (MMC) Director (Dr. Annette Besnilian) and has been implemented in LA elementary schools to help reduce rates of childhood obesity.  With this collaboration, CSUN MMC has been conducting evidence based research and implementing the program with its sustainability plan.

Through CSUN collaboration pilot data were collected with over 1500 students and results indicated that students (actors and viewers) reported significantly higher physical activity and nutrition knowledge at posttest than pretest. Not surprisingly, actors had a significantly greater change from pretest to posttest than the viewers. At one school, 236 students completed a pretest and posttest prior to the intervention (control group), and then those same students completed another posttest after the intervention (treatment group). Thus, each student was his/her own control. The treatment group showed significantly greater change from pretest to posttest than the control group. Results suggested a fun and interactive intervention can be a great tool to increase children’s nutrition and physical activity knowledge. To ensure sustainability, a “train-the-trainer” and “peer-to-peer” model has been successfully implemented, and we continue to identify school personnel and local talent to ensure this program is effective and sustainable.

UEDA Awards of Excellence Finalists presented at the Annual Summit in Long Beach on October 2-3, 2017. Summit attendees then voted for the best initiative in each category.

My Plate The Musical from University Economic Development Association