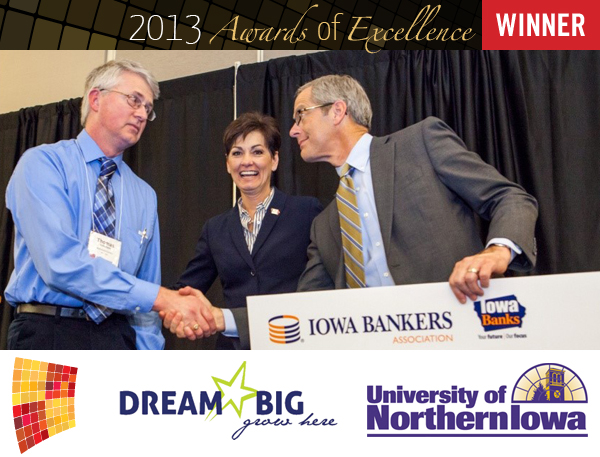 The University of Northern Iowa’s Dream Big Grow Here contest attracts and networks Iowa entrepreneurs with resource and service providers through an innovative statewide contest that rewards a good pitch and a sound business approach with cash.

Dream Big Grow Here utilizes a custom contest technology to attract entrepreneurs to upload their ‘dream’s to start or expand a business, then encourage friends, family, customers to vote for them.  Top vote getters compete in a regional Pitch Off event for a $5,000 cash award.  Regional winners then compete for another $10,000 grand prize during a statewide Pitch Off at the end of the year. UNI recruited six regional economic development organizations to collaborate in the launch of the first DreamBigGrowHere contest in 2011.  Wildly popular, 142 companies competed in an online contest, attracting more than 100,000 votes and half a million online views. Pitch Off events among winners connected entrepreneurs with regional and statewide resources/service providers.  In 2012, two hundred twenty five contestants took part in one of ten regional contests and a waiting list was established for EDO’s wishing to host.

With SBA support, UNI scaled DreamBigGrowHere in 2012 and recently partnered with Rogers State University to beta test Dream Big Oklahoma! in the fall of 2013. A national rollout of Dream Big! is planned for 2014.

There is a significant body of research which suggests that near-future job growth in the United States will come from young companies. Our economy, once driven by manufacturing, took a sudden and abrupt turn in the mid-1990’s to a new and different economy, one driven by innovation and led by entrepreneurs. In many regions across the country, economic development practices associated with recruitment and attraction (traditionally based upon generous financial incentives, expensive marketing campaigns and 24 hour site selector response demands) are not producing jobs any longer, leaving economic developers nationwide scrambling for alternative means to maintain and effectively grow their economies.

Conversely, the rate of new business startups nationwide has exploded. In the first quarter of 2010, more Americans started a business than at any time in American history. The economy has since rebounded, and those numbers have dropped by 5-6%, but more Americans still start a new business each month than before the great recession- more than 500,000 new businesses every 30 days.

Economic development organizations are being challenged as never before therefore, to move from working with a handful of large, known national corporations to finding large numbers of emerging, small firms who may well be home based, without a sign in the yard, with multiple sub-contractors rather than employees and indistinct business models.  Finding and connecting with these emerging companies is an enormous challenge.  Most communities do not have business licensing requirements; sales tax permits do not capture all new business startups and many of the most promising ventures are hidden in co-works, coffee shops or at home.

The UNI Entrepreneurship Outreach team philosophy is to serve entrepreneurs with a five point approach.  We listen to small business owners, imagine what we can do to make life better; then create sharable solutions leveraging our university and technology assets.  Annually, we evaluate how we’ve done in terms of economic impact and strive to replicate those programs that are effective. UNI surveys the small business community statewide annually however, to assess the business climate, identify emerging and ongoing needs among different business segments and to measure the breadth and depth of home based and emerging business activity in the state.  In 2010, it became obvious that the numbers of startups were growing and that the vast majority of those companies were service professionals and that they were creating jobs (many were sub-contracting jobs) at a higher level than their retail and manufacturing counterparts.

These entrepreneurs expressed concern over a perceived lack of community and economic development organization (EDO) support for their businesses and they noted ongoing confusion in accessing the resources and providers in the state.  There was a clear disconnect between these emerging companies and the community economic development professionals who were charged with serving them.

The UNI team believed that a technology solution could be found to identify and attract entrepreneurs so that EDO’s could engage them over the life of their business and that such an approach could improve business owner access to resources and their peers.  Building upon the premise that all entrepreneurs want to secure cash grants if possible, the Dream Big Grow Here contests were developed as an attractive cash competition to engage entrepreneurs online, where they could then be connected with resource providers in their home communities and online.  As it was developed over the first two years, it also became a powerful tool to foster collaboration between existing service providers and a marvelous way to celebrate small business in the state.

UNI directed the creation of an innovative online contest technology at www.Dream Big Grow Here.com, developed a model for a statewide contest to attract and network entrepreneurs, and recruited partners and sponsors to launch Dream Big Grow Here in 2011.   Critical to the success of Dream Big Grow Here was the development of a new technology which could host multiple contests simultaneously, provide easy voting by large numbers of supporters and would promote online interaction among visitors to the site.  UNI subcontracted the development to a company called Far Reach, a UNI business incubator graduate with a keen understanding of the startup experience.

The UNI team envisioned a contest model built upon the participation of many regional economic developers, who would locally market and brand each contest and would most benefit from the resulting connections with those business owners.   Six regional EDO’s were recruited to launch the first Dream Big Grow Here contests in 2011.  Each EDO was asked to contribute $2,500 in contest winnings, which were matched by corporate sponsor funds for a $5,000 regional pot.  Each EDO was provided basic marketing materials, a template for contest rules and online support from the UNI team in managing their regional contest. Statewide sponsors were recruited by the UNI team to buy down the costs to EDO’s in exchange for advertising and sponsor branding online, and at the Pitch Off events.  Wildly popular, 142 companies, from 44 counties competed in a 2011 online contest, attracting more than 100,000 votes in three weeks, plus 180,000 site visits and 550,000 page views.  Local, state and national media followed the contests and subsequent pitch-off events.  Fifty six newspaper, radio, and television stations covered the contests, 2,500 supporters watched a DBGH YouTube video and the average contestant saw their FB and website traffic grow exponentially.

The use of an online contest to attract, learn about and engage large numbers of entrepreneurs is novel.  Unlike business plan competitions which attract only small numbers of deeply committed entrepreneurs, Dream Big Grow Here attracts hundreds of entrepreneurs at different stages of business development and across many industries. The online pitches capture critical information about these entrepreneur’s plans for startup and growth which can be used by regional EDO’s to better serve them and others on an ongoing basis.

The ongoing success of Dream Big Grow Here has encouraged greater trust, involvement and respect among partners in the state of Iowa.  In 2012 for example, a regional Small Business Development Center (SBDC) hosted a popular social media workshop to assist local contestants in one region build their capacity to secure votes.  This year, that SBDC offered to share their workshop curriculum and/or travel to other contest regions to deliver that workshop at no cost to the partners.

Dream Big Grow Here has been an over-the-top kind of success for all involved.

Economic development organizations benefit from being branded as regional leaders supporting small business and entreprenership. Dream Big Grow Here.com provides an ongoing tool to for EDO’s to identify and connect with small companies in their regions, plus emails accrued during each contest are coverted into opt-in lists, connecting the regional EDO’s with small companies on an ongoing basis.  EDO’s have also found benefit from new collaborative relationships with peer organizations in the state.

Marketing and publicity is a major benefit to entrepreneurs entering the contest, even if they do not win. Many contestants have been interviewed by local radio and television stations; most every local newspaper covers their contestants in depth. Contestants regularly talk about being stopped on the street by strangers who want to tell them they voted for them online. The regional Pitch Off events attract large audiences of local supporters from the community, creating a public celebration of support for small business.  Many contestants have been approached by angel investors, loan programs and private individuals after pitching (often those who don’t win!) and several strategic partnerships have been created between small businesses who connected online.  Every contestant comes away with better technology skills.

The state of Iowa benefits from the improved ecosystem supporting innovation and entrepreneurship.

The statewide Dream Big Grow HerePitch Off is held during EntreFest, Iowa’s annual small business conference.  Open to the public, the statewide Pitch Off attracted 300-400 attendees in both 2011 and 2012.  The celebrity emcee for the 2012 statewide Pitch Off was Iowa’s Lt. Governor Kim Reynolds. Her presence enhanced the credibility and importance of small business, furthering Iowa’s efforts to build a place where all Iowans are inspired to innovate.

Quantitative Outcomes:  142 companies competed in an online contest in 2011, attracting more than 100,000 votes from all over the country, 180,000 site visits and 550,000 page views of entries.  One contestant (a veteran of the Iraq war) secured hundreds of votes from American soldiers overseas.  Nearly half of all Iowa counties had a contestant in Dream Big Grow Here in 2011. Fifty six newspaper, radio, and television stations covered the contests, 2,500 supporters watched a DBGH YouTube video and the average contestant saw their FB and website traffic grow exponentially. Regional Pitch Off events brought communities together in meaningful ways to support their own residents.

The Dream Big Grow Here approach can be effectively replicated as a tool to support and promote entrepreneurship among any number of audiences, including youth, university students and/or within specific industry sectors. The UNI team has been approached by high school districts, community college associations and folks in the technology sector interested in replicating the initiative among specific segments of the entrepreneurial community.  Wherever collaborative partners can be found, Dream Big Grow Here can be implemented cost effectively.

The technology at www.Dream Big Grow Here.com has been scaled in the past year, thanks to financial assistance from the Small Business Administration (SBA).  As a result of the technology upgrades, Dream Big Grow Here can be readily scaled up or down- a single contest can be successfully hosted and achieve many of the benefits of the overall initiative with a small investment in a cash award and a single contest license from UNI or by using a free online contest technology such as PitchBurner.

In the spring of 2013, UNI sought an initial partner to beta test Dream Big Grow Here in another state.  Jeri Koehler of Rogers State University (RSU) in Oklahoma is leading a launch of Dream Big Oklahoma in the fall of 2013.  Under the guidance of RSU’s Innovation Center, six contests are planned spanning the state and a Pitch Off event will be held to select a statewide Dream Big Oklahomawinner in the spring of 2014. UNI hopes to learn much about replicating the approach through the RSU partnership and roll out a national expansion in 2014.

UEDA Awards of Excellence Finalists presented at the Annual Summit in Pittsburgh on October 28, 2013. Summit attendees then voted for the best initiative in each category.