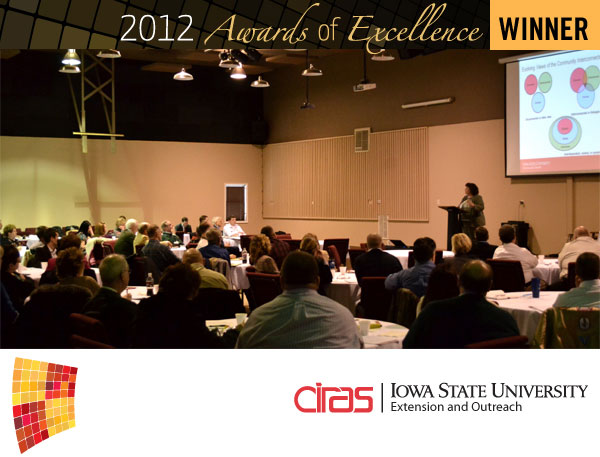 Iowa is a state undergoing a transition from a primarily rural to a primarily urban-based population. The state hosts ten metropolitan regions. These major economic regions are distributed across the state and serve as substantive anchors for education, health and social services, entertainment and cultural opportunities, and overall business activity.

The state also hosts 15 micropolitan regions—counties with an urbanized population between of 10,000 and 50,000. Iowa’s micropolitan areas are important employment, trade, and service delivery centers. These micropolitan and smaller urban counties generally serve as manufacturing and transportation centers as well as locations of regional retail trade, business services, and health and education services.

While these micropolitan areas have evolved over the last few decades to become regional employment nodes, several of these centers have suffered from stagnant or declining trade activity and other nonfarm employment practices. A prime example is Lee County, Iowa, located in the southeast corner of the state.

The county is home to slightly more than 35,000 people and has two dominant cities, Fort Madison (population 11,051) and Keokuk (population 10,780). These cities are 23 miles apart along the Mississippi River. The county’s share of the state’s population, job opportunities, and average compensation has seen a steady decline during the last twenty years. Despite efforts by the community leaders, businesses, and economic developers, the region regularly has one of the highest unemployment rates in Iowa, peaking at 11.9 percent in January 2009 and holding between 9 and 11 percent through January 2012.

The Center for Industrial Research and Service (CIRAS), a unit of Iowa State University Extension and Outreach, recognized signs of economic growth potential in Lee County while identifying possible regions for the Sustainable Economies Program (the state’s EDA-University Center program). Businesses that remained were growing and community leaders were actively working to improve the region. Without collaboration and communication regarding their current economic challenges and hurdles, however, it was impossible to take any corrective strides that could pave the way for a sustainable regional economy.

After discussions with several groups of key stakeholders in the region, the Sustainable Economies Program team at CIRAS determined that Lee County was a strong candidate for services, and it was selected as a participant in the program.

The resulting economic analysis identified a variety of both expected and surprising results, providing insight into the regional economy.

Armed with detailed research on the Lee County regional economy, the Iowa State University team held a Sustainability Summit in Keokuk. A total of 88 individuals from the county—citizens, community leaders, business leaders, and elected officials—came together to learn the facts about the regional economy.

Iowa State University experts, well-versed in many of the same issues facing Lee County, presented the economic sustainability data. Participants also received copies of the analysis report, providing them with speedometer-style dashboards for each of the 106 indicators. Additionally, the report included specifics on the region, complete with their performance relative to their 40 peer RTCs across the state, how the indicator was calculated, and the relevance of that indicator to regional planning. Throughout the day, participants interacted with the experts to gain a better understanding of the facts driving their region’s performance.

The final session of the Sustainability Summit was a facilitated discussion to establish the region’s priorities and goals. The large audience was broken down into small discussion groups. Each group of participants was asked a series of questions to help them determine economic issues and needs. Participants provided input on long-term regional goals, the top three issues in the region, and specific near-term actions that they could take to begin to improve as a regional economy.

Based on the outcomes of the summit, Iowa State University then facilitated additional planning sessions to move the priorities into action. These planning meetings focused on taking the ideas, aligning them with the region’s strengths and weaknesses, and developing plans for implementation working toward economic sustainability.

With assistance provided by CIRAS, the region’s stakeholders formulated an improvement plan. Both Keokuk and Fort Madison continue to operate and act as separate entities, but they are beginning to show signs of regional collaboration.

The region is working together to address the need for effective leadership, a key gap identified in the assessment process. Local stakeholders worked with CIRAS to launch a regional leadership development program. The first class begins in September 2012.

In addition, the city of Keokuk has already taken several steps in response to direct findings in the study:

Businesses in the area are now proactive partners in the program. Armed with a better understanding of the region’s economic sustainability, companies are taking action. CIRAS is currently working with three companies in the region, focusing on growth strategies with the use of a variety of tools.

A key consideration in developing a valuable indicator set is a long-term commitment to indicator updates. For a specific region, such as Lee County, the CIRAS Sustainable Economies Program team taught the participants to select indicators that are relevant to their long-term needs. This practice ideally reduces the volume of indicators from more than one hundred to a manageable number.

The indicators provided are all generated using publicly available data, so tracking performance to a smaller set of indicators is achievable for almost any size of community.

Long-term maintenance and updates to the larger indicator set for the 40 RTCs across Iowa are currently under consideration. Iowa State University has received interest from multiple sources, including other RTCs throughout the state as well as public and private economic developers. This high level of interest can lead to a relatively low cost of indicator maintenance by using fee-based models.

Other states, universities, and/or communities could adopt this structure relatively easily. Many of the indicators are used nationwide and are therefore directly portable to other states. Several indicators are state specific and therefore would require identification of relevant, related indicators in each state. While this would necessitate initial effort, there is value in understanding the source and relevancy of these local indicators in order to develop a set that can help a local community make relevant decisions.