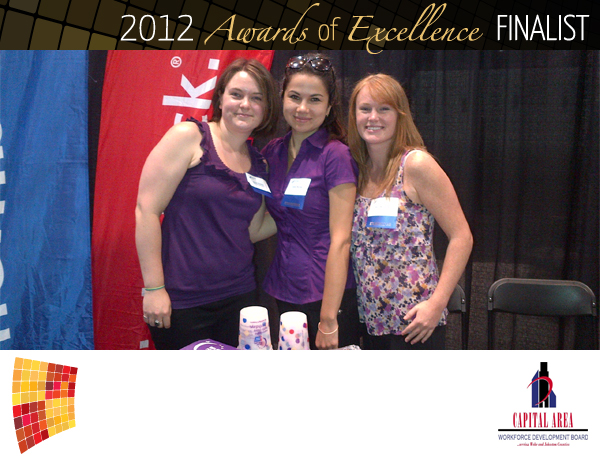 Since the recession from 2008 to 2011, downsizing and job cuts have affected every geographic area and countless industries. According to the Economic Policy Institute and the U.S. Department of labor, about 1.5 million, or 53.6 percent, of bachelor’s degree-holders under the age of 25 last year were jobless or underemployed, the highest rate in at least 11 years. In contrast, the percentage of unemployed bachelor’s degree holders in this age range was 41 percent in 2000. Out of the 1.5 million about half were in part time jobs or full time jobs that were entry level and unrelated to their area of study. Through research and anecdotal inquiries, we realized this national issue was also present with our local graduates.

In December 2011, leaders from the Capital Area Workforce Development CAWDB decided to use its expertise in transitioning dislocated workers and utilize similar concepts to address graduates who had not transitioned successfully into the local workforce. The CAWDB titled the program “Backpacks to Briefcases” to signify the successful transition from an academic environment to a professional work environment.  The plan would be to recruit recent four year degree college graduates, provide an intensive one-week workshop curriculum, and then coordinate internships with local companies and organizations. The areas of concentration for the workshops would include resume preparation and refinement, effective interview techniques, networking practice, career exploration, interpersonal skills, and job search strategies. Once the job readiness portion was completed the clients would be introduced to internship opportunities through job fairs and networking events. The carrot for the participating employers would be that the CAWDB would provide a $12/hour stipend and worker’s compensation insurance and the employer would only have to supply meaningful work and adequate supervision. The goal would be to for each client to work 32 hours per week for a period of twelve weeks. The employer could hire the person after the internship but was not obligated to hire. The original goal was to enroll 50 clients and budget approximately $230,000 through June 2012.

In December 2011, the CAWDB hired a coordinator to oversee the program and to provide ongoing career coaching for the clients. In January, the coordinator and other staff members began recruiting potential clients who had graduated with a bachelor’s degree within the past 2 years. The NC State Career Development Center agreed to host the initial interest meetings at no charge so that it would be convenient for their graduates as well as those from the surrounding colleges/universities.  Additionally, the NC State CDC promoted these meetings to their recent graduates using their ePACK system which reached out through email messaging. The CAWDB staff also visited other local universities and posted information on websites and Craig’s List. The marketing efforts proved successful; 52 enrollments occurred from January 2012 to June 2012 and 12 enrollments occurred in July and August. Graduates in the program were required to be Wake or Johnston county residents since that was a requirement of the Workforce Investment Act funding; however, the graduates hailed from 28 universities across the Southeast including: North Carolina State University, University of North Carolina, East Carolina University, North Carolina Central University, Clemson University, Old Dominion University, Florida A & M University, and the University of South Carolina. NC State graduates comprised of 50% of the client population. The types of disciplines widely varied and a sample of those included were: Accounting, Economics, Business Administration, Computer Networking, Economics, Finance, Graphic Arts, Human Resource Management, International Relations, Marketing Political Science, Psychology, and Supply Chain Management.

The Business Service Team at the CAWDB was given the task to contact employers about this new initiative. Marketing materials were created and the team began reaching out to existing and new contacts. Over 30 organizations agreed to participate in the program including those from the private for profit sector (73%) and the non-profit sector (27%). Notable organizations that participated include: Research Triangle Institute (RTI), Fruedenberg, Big Brothers Big Sisters of the Triangle, Covidien, Allied Barton, and the American Cancer Society.  The size of the organizations varied greatly, yet, the number of smaller companies weighed in significantly at 68% and the larger companies comprised 32%. Human resource leaders and business owners were invited to several job fairs and networking events to meet the recent graduates in person. Each organization provided a written job description and a mentor who would oversee the client’s work.

During the first 6 months, 39 internships were coordinated. From the 52 enrollments, an intern placement percentage (39/52) equals 75%. Of those 39 internships, 13 participants were eventually hired into full time positions. Another 10 individuals were hired full time without first completing an internship. Those who were not hired continued to receive job search assistance and career coaching from the coordinator. Looking at the combined total of internships (39) and those employed full time/without internship (10), the placement percentage equaled (49/52) 94%. Since July, 5 additional internships were arranged and 2 recent graduates were hired full time.

The most significant statistic is that 100% of the recent graduates took an internship or job in their desired field compared to the 50% rate on a national level. The clients were not mandated to take any available internship, but were given options that related to their course of study. Each client interviewed with a potential employer, and an internship was agreed upon only if both parties thought it would be mutually beneficial. Below is a partial list of the internships: Administrative Assistant, Billing Specialist, Bioenergy Research, Bookkeeper, Cancer Prevention study, Communication Specialist, Employment Consultant, Engineering, Event Planning, Fundraising Specialist, Graphic Artist, Information Technology, Marketing Assistant, Paralegal trainee, Human Resources, and Web Design Assistant.

The program will be continued on an ongoing basis and the goal for the program is to arrange 55 internships from July 2012 to June 2013. The Business Service Team plans to add an additional 30 employers to the pool. CAWDB has documented all the processes and outcomes and recently shared this information at the “Reemployment Bridge Institute” with other workforce development leaders across the Southeast. The hope is that this program can be duplicated by other areas where there is a significant population of recent college graduates.