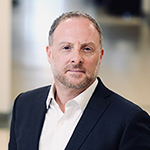 Matt Hebb is an Atlantic Canadian leader, with a proven ability to bring together partners and organizations on transformative and innovative projects across the region.

Matt joined Dalhousie University in 2013 and serves on the executive team as Assistant Vice-president, Government Relations and Economic Development, where he co-leads Dalhousie’s strategic priority to foster innovation, entrepreneurship, and creativity.

Prior to his role at Dalhousie University, Matt served in Nova Scotia’s provincial government as Principal Secretary to the premier.

With a focus on collaborative partnerships, he has been deeply involved in the establishment of significant projects in Atlantic Canada, including the Emera ideaHUB, a $64M transformation of Dalhousie’s Sexton Campus into an innovation hub. His strategic leadership has contributed to expanding entrepreneurship within Dalhousie, deepening partnerships with key players in the innovation ecosystem and establishing Nova Scotia as the first Canadian jurisdiction accepted into the MIT Regional Entrepreneurship Accelerator Program, a global initiative to accelerate economic growth through innovation-driven entrepreneurship.

Other collaborative work has included the creation of innovation sandboxes with the Province of Nova Scotia – spaces for students to freely explore innovation and entrepreneurship, and development of a partnership with the Rotman School at the University of Toronto to expand the highly successful Creative Destruction Lab to Atlantic Canada, where it is hosted at Dalhousie.

Matt has been instrumental in the realization of several major ocean-related initiatives in Atlantic Canada, including the Ocean Frontier Institute, which attracted $220M in public and private investment, the Centre for Ocean Ventures and Entrepreneurship (COVE). More recently, Matt was a co-founder and the interim CEO of Canada’s Ocean Supercluster, a new platform for collaborative innovation and commercialization backed by significant private and public investment. He lead development of the proposal, securing industry investment, business planning, and negotiations with the federal government.

Matt recently concluded a third and final term as Chair of the Board of Halifax’s economic development agency, the Halifax Partnership, where he led the development of Halifax’s current economic strategy, and initiated a plan to establish the Halifax Innovation District, enlisting partners in a collaboration to amplify social and economic impact of the city’s dense corridor of innovation and entrepreneurship capacity.

An avid musician, he was the co-chair of the 2018 East Coast Music Awards in Halifax. He is active in a number of national and international university associations.

About UEDA
Board of Directors
Bylaws
Committees
Staff
Contact Us