Rising from the Ashes:
A Downtown Master Plan Transforms a Community 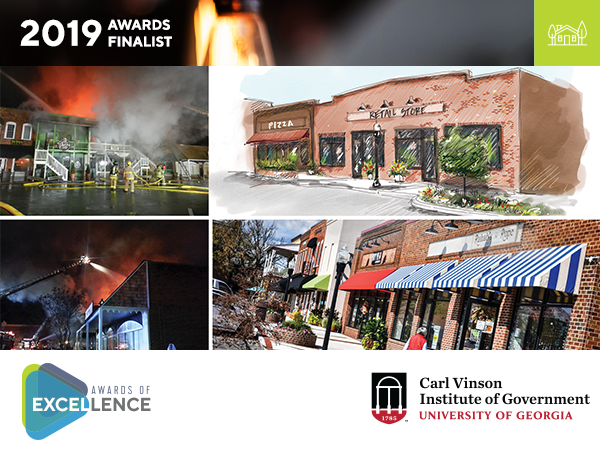 “Downtown’s on fire!” is never a call that a city manager, elected official, or business owner wants to hear. But that’s the call that came on the night of March 5, 2014 in Clarkesville, Georgia. The sunrise brought with it the realization that four buildings, some more than 100 years old, were lost, 30 jobs were gone, and this small community of about 1,730 was devastated. As the days and weeks turned into months of trying to attract investment in the charred remains, the city realized that their best hope was to buy the buildings and redevelop them themselves. To do that, the City of Clarkesville knew they needed a plan, so they turned to the University of Georgia’s Carl Vinson Institute of Government and its Renaissance Strategic Visioning and Planning downtown master planning initiative to help them create a vision, plan, and work program. The city realized that they didn’t want to just think about resurrecting what had been lost, but they wanted to take a broader look at downtown, recognizing that rejuvenating the whole economic engine of the community was critical.

Through broad community input, the plan was completed in six months. Implementation began immediately and Clarkesville is once again on fire but in a wholly different way. The planning initiative created and led by the Institute of Government and embraced and implemented by the city has worked: there are more jobs downtown, more businesses downtown, and more property tax revenue generated downtown than before the fire.