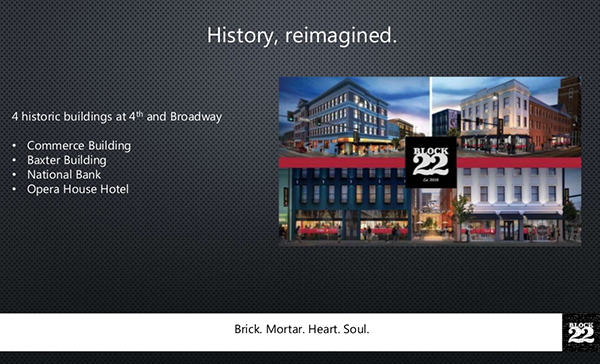 Block22 is a unique, mix-use living, learning community in Downtown Pittsburg that features residential, commercial, dining, and entertainment spaces. It will combine nearly 100 units of Pittsburg State student housing with more than 16,000 square feet of innovation space for students to explore their own entrepreneurial ventures, while also contributing to the success of local entrepreneurs.

Located at 4th and Broadway, Block22 is made up of four historic buildings that are being both renovated and restored. The historic properties included in Block22 are the Commerce, Baxter, National Bank, and Opera House Hotel buildings.

The name “Block22” ties into the city’s rich heritage of entrepreneurs and business pioneers. The city’s forefathers originally platted Pittsburg into 51 blocks. The oldest building included in the Block22 project, the Opera House Hotel, was located in Block 22 of the original map. Hence, the moniker Block22.

Block22 is funded through a public-private partnership between Pittsburg State University, the City of Pittsburg and the Vecino Group, a development/housing specialist based in Springfield, Mo.

UEDA Awards of Excellence Finalists presented at the Annual Summit in Milwaukee on October 22 and 23, 2018. Summit attendees then voted for the best initiative in each category.