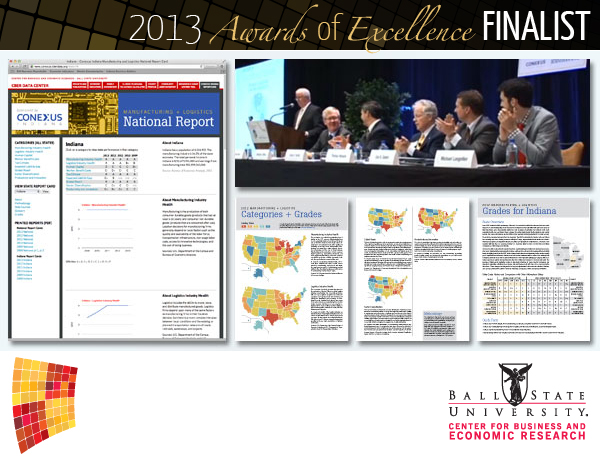 Sponsored by Conexus Indiana and developed by Ball State University’s Center for Business and Economic Research, the Manufacturing and Logistics Report shows each state’s performance among its peers in several areas of the economy that underlie the success of manufacturing and logistics.  The annual report and interactive website allow an audience of economic developers, business owners, policy makers, and informed citizens to identify the strengths and weaknesses of a state as relevant to the manufacturing industry and track state performance since 2009.

Based on the findings in the first few years, Conexus Indiana evolved its project needs to emphasize the importance of technologically educated human capital, especially as the industries adapt to a highly competitive and increasingly high-tech global market.

The Ball State Center for Business and Economic Research organized the project, collected and analyzed data sets, developed the display of the reports and website, adapted the project to the custom needs of Conexus Indiana (the client), presented the findings at an annual event with sponsorship from a statewide news journal, and considered feedback when reviewing the project and planning for each subsequent year.

In order to assess the health of the manufacturing and logistics industries, Ball State developed a unique scoring system that assigned grades to categories or “subjects” very similar to a school report card. Data sets were collected for each state (for the June 2012 report, we evaluated data for 46 factors that contributed to 9 categories). The states were ranked for each category factor. The scores were then totaled and averaged for each category. Once ranked by value, the top 5 states received a grade of A. The bottom 5 states received a grade of F, with the middle states earning grades ranging from B+ to D-.

Although adjustments were made and additional categories were added through the years, we were able to track 4 years of grades for most categories in 2012. The desire to display each state’s progress prompted our decision to create an interactive website (premiered in June 2012) that graphed the annual change in grades by state.

The timeline for the first iteration of the project was fairly brief; the Conexus Initiative was created in February 2008 and the first manufacturing and logistics report, “The State of the Industry”, was presented in May 2008. After the initial report and feedback, the focus shifted to the “score card” portion of the report that requires the collection and calculation of more than 40 rich data sets. Conversations with the client occur throughout the year in preparation of the annual public presentation of the report findings each June.

Since its first iteration in 2008, the annual Manufacturing and Logistics Report has assisted Conexus Indiana in its efforts to advance Indiana’s manufacturing and logistics workforce. The project has grown to serve as an awareness tool for economic development initiatives across the nation (prompting the question: Is our state ready?).

News media in at least 12 states reported on the release of the 2012 Manufacturing and Logistics Report and website (http://conexus.cberdata.org). In 2013, that number rose to 36 states that had media coverage of the findings. From June through July 2013, the website had 1,204 unique visitors (unfortunately, data are not available for 2012).

Ball State CBER is the point of contact for news outlets that are interested in the impact of the report or need more information about the analysis. These requests often dominate office activities in the weeks immediately following the Indianapolis presentation and public release of the report findings.

We strive to make the reports and website easy to access, easy to use, and easy to understand for an audience ranging from economic and business developers to elected officials, community leaders, and informed citizens.  Because of the broad appeal, the annual public presentation gained sponsorship from a state news organization and is regularly attended by a crowd of approximately 400 people.

The project illustrates the changing needs of the industry for an educated and healthy workforce (aka human capital) and emphasizes a number of business-attracting factors, including a business-friendly tax climate and access to productive and innovative technologies. Understanding what the manufacturing and logistics industries need to thrive is essential to economic developers, policymakers, elected officials, and the businesses of tomorrow. Rankings in categories such as “Tax Climate” may prompt policy changes to keep the state competitive against its peers.

Ball State CBER has produced an in-depth state report for Indiana that explains the state’s performance in each category and economic conditions that may have triggered the change in grade. Custom print reports for all 50 states are possible but tedious to produce at this time; however, the website offers individual profiles of each state’s progress through the years for each category.

The grading metric used for the Manufacturing and Logistics Report could be replicated by other research centers to focus on other industries. Because the data are collected at the state level, a county-level or MSA-level report would be very difficult. A report comparing regions (New England, the Pacific Northwest, etc) would be possible, but not practical for all industries.

In its current version, the Manufacturing and Logistics Report project is sustained thanks to annual sponsorship by Conexus Indiana and is maintained by the full-time staff of the Ball State Center for Business and Economic Research. The data is collected annually from publicly available government sources.

UEDA Awards of Excellence Finalists presented at the Annual Summit in Pittsburgh on October 28, 2013. Summit attendees then voted for the best initiative in each category.