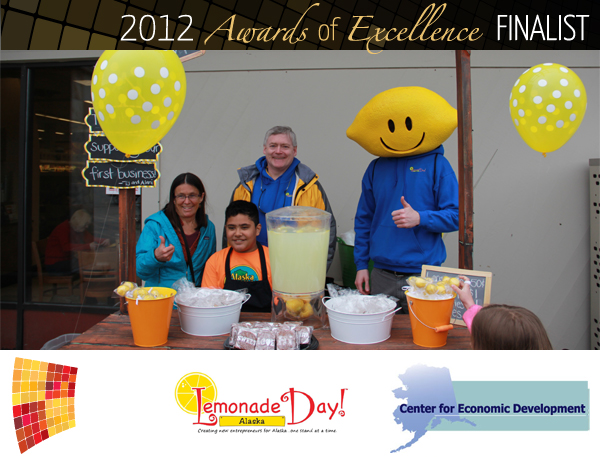 This program addresses a missing element in many youth education programs, the mission is to help prepare youth for life through fun, proactive and experiential programs infused with life skills, character education, and entrepreneurship.

Lemonade Day provides children with the opportunity to learn how to apply entrepreneurial thinking to the workplace and create the foundation for future success in the global economy. The foremost objective is to help today’s youth become the business leaders, social advocates, community volunteers and forward-thinking citizens of tomorrow.

The University of Alaska Center for Economic Development (UACED) initially brought Lemonade Day to Alaska in 2011, when 1,000 youth participated in the city of Anchorage. The program was well received in the community and 94% of the youth who participated indicated they would participate again the following year. For 2012, the Lemonade Day Alaska team took the program statewide. The expansion was explosive and impactful. Over and over, the UACED staff heard individuals in new participating communities express their gratitude for the opportunity to seamlessly integrate this type of program into their community.

The foremost objective of Lemonade Day is to empower youth to take ownership of their lives and become productive members of society – the business leaders, social advocates, volunteers, and forward-thinking citizens of tomorrow.

There are two distinct components of Lemonade Day. First, there is a learning experience through which a child and a caring adult exercise a step-by-step process of starting a business. This process has proven to have a dramatic impact on a child’s understanding of how to be an entrepreneur in any industry. The second component is the actual implementation of the business, which takes place on Lemonade Day, held annually on the first Sunday in May.

The University of Alaska Center for Economic Development has worked extensively to make Lemonade Day Alaska a success. The UACED has worked to build a network of community champions and volunteers to support the program. Lemonade Day Alaska built partnerships in eight hub communities across the state. The UACED staff recruited volunteer program city managers in numerous communities who handled local operations with support and guidance from the UACED staff. Bi-weekly meetings were held telephonically with all city managers to maintain program continuity and ensure positive progress across the state from January until Lemonade Day.

Additionally, Carol Comeau, the former superintendent of the Anchorage School District, has served as a vocal advocate of Lemonade Day Alaska. She has appeared in many promotional materials for the program and also helped to make the initial push to get the curriculum in front of the teachers in the district. Lemonade Day Alaska also partners with many businesses across the state. These business partners are essential in providing youth with mentors in the entrepreneurship field, as well as to provide youth with safe places to house their stands.

Much of Lemonade Day Alaska’s funding comes from community business support as well in the form of sponsorships. One of Lemonade Day Alaska’s partnerships in 2012 was with Lowe’s, who hosted a stand building workshop in which Lowe’s employees worked with participating youth to design a lemonade stand. Another partner, Credit Union One, hosted a workshop on financial literacy in several Alaskan cities. The UACED has worked hard to cultivate these partnerships over the years, and plans are in place to build even more in 2013.

Entire communities, regardless of size, can be involved in this meaningful program. All across the state store owners opened up their storefronts to host lemonade stands, in some cases even mentoring the youth who participated. One of the other great benefits of Lemonade Day Alaska is its concept of experiential learning. By giving youth the opportunity to go out and learn first-hand, Lemonade Day Alaska is better preparing Alaska’s youth for the challenges of tomorrow.
For many youth participating in the program, Lemonade Day Alaska is the first opportunity they have ever been given to take ownership over something. The understanding that they have control over their own success or failure gives youth incentive to become more engaged in the process, oftentimes experiencing a tremendous amount of growth during the course of the program. Many youth struggle find new ways to change their business as the event goes on, or even make plans for improvements the following year. They look for a new location, build a nicer stand, or simply work on developing a better product.

One of the other great benefits of Lemonade Day Alaska is that it allows participants a chance to reinforce what they are already learning in school. The Lemonade Day Alaska curriculum covers many topics that youth learn in school, but Lemonade Day gives them an opportunity to learn through doing. Evidence suggests that people learn exponentially better when given the opportunity to actively participate in the learning process, as opposed to merely being lectured to. By giving youth the opportunity to learn by doing, youth are better able to learn the concepts they are taught in school. Youth have so much fun participating in the program that they don’t even realize they are learning a curriculum.

In 2013, Lemonade Day Alaska will continue its push toward long term sustainability as it looks to reduce costs and raise additional sponsorship funding. Lemonade Day national has recognized the superb work being done by the UACED and has even looked toward Alaska as being a model for other statewide programs across the US and Canada.

Looking to 2013, the Lemonade Day Staff have goals to streamline internal processes and include more volunteers to minimize the expense of staff time and increase community buy-in to the program. In addition, our goals include expansion to at least 5 more participating communities within the state, bring in more sponsors, community partners, business partners, and increase awareness regarding the program.

“It is important that we teach future generations the importance of responsible business practices and instill the entrepreneurial spirit at a young age – an age that allows them to have hope and vision to excel in the future,” says founder, Michael Holthouse, “Our goal is to reach kids as a critical stage in their lives – that time when they are at a crossroads between a very good or bad path.”