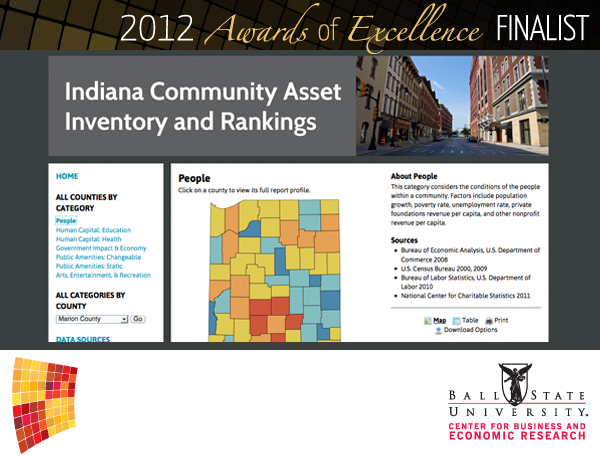 This project is part of a larger Indiana statewide initiative T21, which is designed to modify the state role and local role in tourism development, community and economic development and rural development. This set of studies and interactive website is designed to focus the efforts of local economic developers, not for profit organizations, local elected officials and state agencies on individual strengths and weaknesses in regions. In addition to this study, the process in T21 involved every state university and college, regional meetings in each region and most state agencies over a one year period in the development and maturation of the project.

The Center for Business and Economic Research and the Office of Building Better Communities at Ball State University led this project (T21) and spearheaded the development of the Community Asset Inventory and Ranking (CAIR). By involving all state universities and state agencies involved in community development, the university was able to leverage the project into a significant part of the effort of the state to improve community development. This is the first statewide interactive measurement of quality of place, health and human capital, government efficiency, static and changeable amenities and recreational amenities of which we are aware. Building form the considerable academic literature on amenities, this study employed over 115 unique or combinatorial data elements to construct comparable, county-level grading of assets, to which a grading schema was applied in a manner that clearly outlined relative strengths and weaknesses. The interactive website is publicly available at http://asset.cberdata.org

The goal of the project sponsors to initiate a significant statewide discussion on quality of place, human capital development and amenity development in communities around Indiana was achieved. This report was covered by almost every media outlet in the state and saw widespread editorial comment by at least eleven different news outlets, including each major city in Indiana. Since the report was released, the study team has spoken to groups representing 24 different counties and has scheduled statewide presentation of the data in venues in July, August, and September 2012.