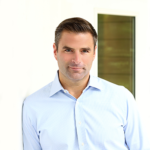 Eddie Pauline joined the BioOhio team as President and CEO in August 2021.

Eddie previously served as the Director for Economic Development for The Ohio State University within its Enterprise for Research, Innovation, and Knowledge. In this role, Eddie led the economic development and economic impact functions to attract new companies to Ohio and retain and expand Ohio businesses. Working closely with tech transfer and commercialization partners, corporate partnerships, the innovation district, medical center, government affairs, and startup portfolio, he initiated and guided campus-wide and industry-specific workforce, innovation, and placemaking programs to drive economic growth.

Prior to joining Ohio State in 2010, Eddie worked in the digital media industry for startups and large corporations, primarily in Seattle and New York, where he was part of the team that led the successful acquisition of Scout.com by Fox Interactive Media.

Eddie holds a BA and a BS from The Ohio State University and an MBA from Franklin University. He is an Ohio Certified Economic Developer. Eddie, his wife Lindsey, and their three children live in Worthington, Ohio.

About UEDA
Board of Directors
Bylaws
Committees
Staff
Contact Us